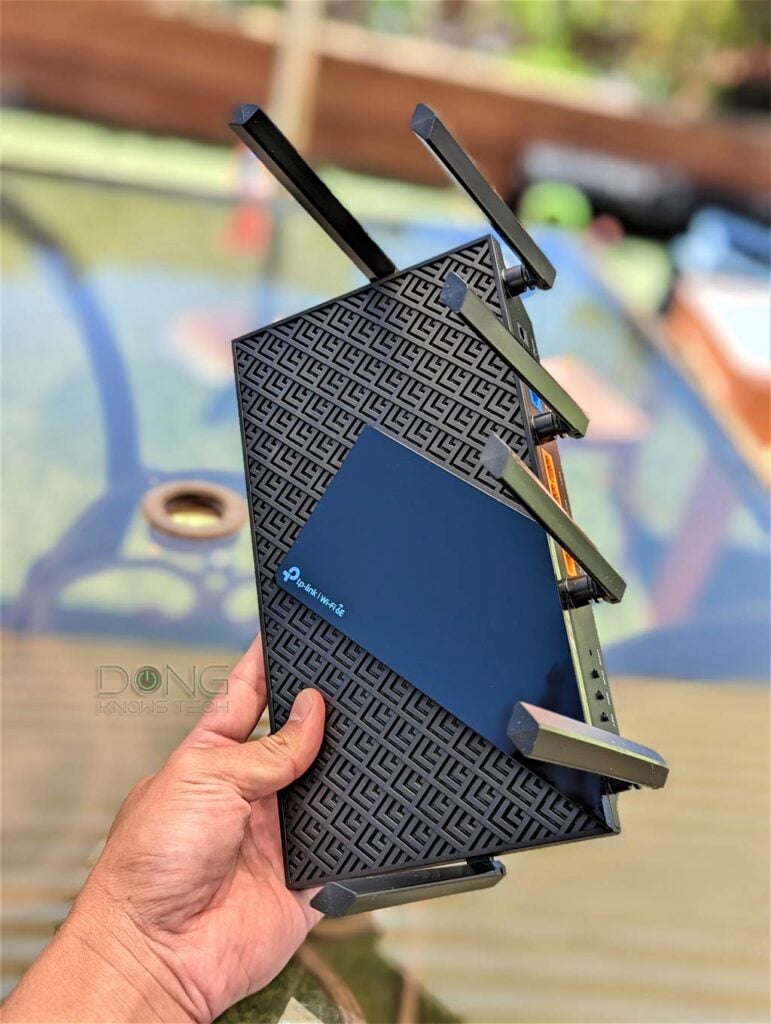 You’ll learn more about these confusingly named routers in this review, but to cut to the chase, the new Archer AXE75 is the only noteworthy one.

Most importantly, the new router is worth the reasonable price, all things considered, and will make an excellent choice for those looking to enter the world of Wi-Fi 6E without digging a hole in the wallet.

Dong’s note: I first published this piece on July 21, 2022, as a preview when the router was available for purchased and updated it to an in-depth review on July 26 after thorough hands-on testing.

Since Wi-Fi 6E became commercially available in early 2021, TP-Link has been the company with many announcements about this new standard.

During CES 2022, it touted a list of new broadcasters, including the top-tier Archer AXE200, the Quad-band  Archer AXE300, and the super-cool AXE200 Omni.

Now, in the 2nd part of 2022, we’ve seen only the entry-level Deco XE75 and now the Archer AXE75; both have middling hardware specs and are relatively mundane in design. The AXE75 looks just like the AX73, physically.

But, at the least, TP-Link has kept some part of its promises, an improvement compared to the hardware it announced in early 2021, which all became vaporware. There’s hope that the company will ship more products before the year-end.

And while the new Archer AXE75’s hardware is somewhat entry-level, that might be all most home users would need, and the router beat my expectations in testing — more below. So its low cost can only mean better, more widespread Wi-Fi 6 adaption.

With that, let’s check out its specs.

The Archer AXE75, Archer AX73, and Archer AX75 all share the same hardware design, which looks like a typical router with four antennas sticking up from their back, where the ports are, and two from each side.

When added all their bands together, each router has a total bandwidth of 5400Mbps. In terms of Wi-Fi speed, each can be as fast as its fastest band since a Wi-Fi connection takes place on a single band simultaneously.

Since we only have 2×2 Wi-Fi 6 and 6E clients, chances are you’ll get the same real-world speed from any of them in real-world usage.

None of these routers has a Multi-Gig port. Consequently, they generally cap at 1Gbps — the speed of their Gigabit port.

Interestingly, all three share the same suggested retail price of $199, making the AXE75 the most affordable Wi-Fi 6E router yet.

The Archer AXE75 shares the same Linux-based firmware as the rest of the Archer family. Consequently, you can set it up the way you do any router with a standard web user interface.

Specifically, hook a computer to its LAN port and navigate a browser to the router’s default IP address (192.168.0.1) or tplinkwifi.net, log in with the default password (admin), and the rest is self-explanatory.

The interface allows for standard network settings for any home network, including VPN (client or server), port management (forwarding, triggering, DMZ, etc.), basic access control via MAC address, and the ability to manage the network remotely via Dynamic DNS.

On top of that, like the case of the AX73 and many other ARcher routers, the AXE75 supports OneMesh, where you can add select extenders to form a mesh system, similar, though much less comprehensive, to the case of Asus’s AiMesh.

And then, the router can do even more, but not via its web user interface.

Specifically, just like the case of the Deco family, such as the Deco XE75, the Archer AXE75 puts QoS, Parental Control, and online Protection as part of its Homeshield suite.

To use HomeShield, you must opt for the Tether mobile app and link the router with a TP-Link ID via an account with the vendor. After that, you can also manage the router remotely but logging in with the vendor generally translates into privacy risks.

HomeShield is available at the basic level — it’s pretty thin. To enjoy it, you must opt for the Pro level, which costs $6/month or $55/year.

I tried the Tether app briefly, and it worked as intended. If you don’t like the app or are concerned about privacy, you can unbind the router from the account and use the router strictly with its web user interface.

It’s important to note that having to sign in with an account means your hardware always connects to the vendor. In TP-Link’s case, you’ll manage your home network entirely or partially through the company.

TP-Link is headquartered in China, where the practice of online privacy, surveillance, and security might differ from the rest of the world.

Privacy is a matter of degree. While managing your network via a third party is never a good idea, data collection varies vendor by vendor.

I didn’t expect much from the Archer AXE75 due to its middling Wi-Fi specs and the lack of Multi-Gig ports. But considering its specs, the router did well in my testing.

The router had the same coverage as the AX73 on the 5GHz and 2.4GHz bands. You can expect it to blanket a home of roughly 2000 ft² (186 m²) when placed at the center. But your mileage will vary.

On the new 6GHz band, it was about the same as any other Wi-Fi 6E router. This band has a much shorter range than the other two and generally only works well when clients are within a line of sight.

The route passed my three-day stress test with no disconnection. It proved to be reliable.

In the way I test the Wi-Fi routers, the Archer AXE75’s Wi-Fi speeds are limited by its network ports. Since the router has no Multi-Gig port, there’s no way to see faster Wi-Fi speed than what comes into its Gigabit WAN or Gigabit LAN port.

And in testing, the router’s 5GHz and 6GHz bands individually had sustained speeds equivalent to a wired Gigabit connection after overhead at a close range of 10 feet (3m) or closer. The rate degraded slightly at 40 feet (12 meters) out (within a line of sight), as shown on the charts.

As for Internet speed, in the best-case scenario, within 40 feet and a line of sight, I generally got between 500Mbps to 820Mbps on a Wi-Fi 6 laptop. For that anecdotal speed testing, the Archer AXE75 hosted a 10Gbps Fiber-optic broadband connection via its Gigabit WAN port.

Clearly, without a Multi-Gig port, you can only expect the ARcher AXE75 to deliver sub-Gigabit connection speeds at best.

The Archer AXE75 did OK in my testing as a mini NAS server. When hosting a portable SSD, the WD My Passport, it delivered a read speed close to 100MB/s and a write speed over 50MB/s via a Gigabit wired connection.

These numbers were similar to the Archer AX73 and fast enough for casual network file sharing. Like other Archer routers, the AXE75 can work as the backup destination for Time Machine. In this case, it’s only fast enough for one Mac at a time.

The TP-Link Archer AXE75 AXE5400 Tri-Band Wi-Fi 6E router doesn’t have anything new to offer. For the most part, it’s an entry-level router now with the support for Wi-Fi 6E, joining the pool of about a dozen others.

But it’s the first that comes with a sub-$200 price tag (before taxes.) That plus the relative performance make it an excellent buy for those needing a new standalone router to host their modest sub-Gigabit broadband.

If you’re among that crowd, get one today. If not, check out this list for more Wi-Fi 6E options.

Wanna be in touch? Sign up for DKT newsletter!