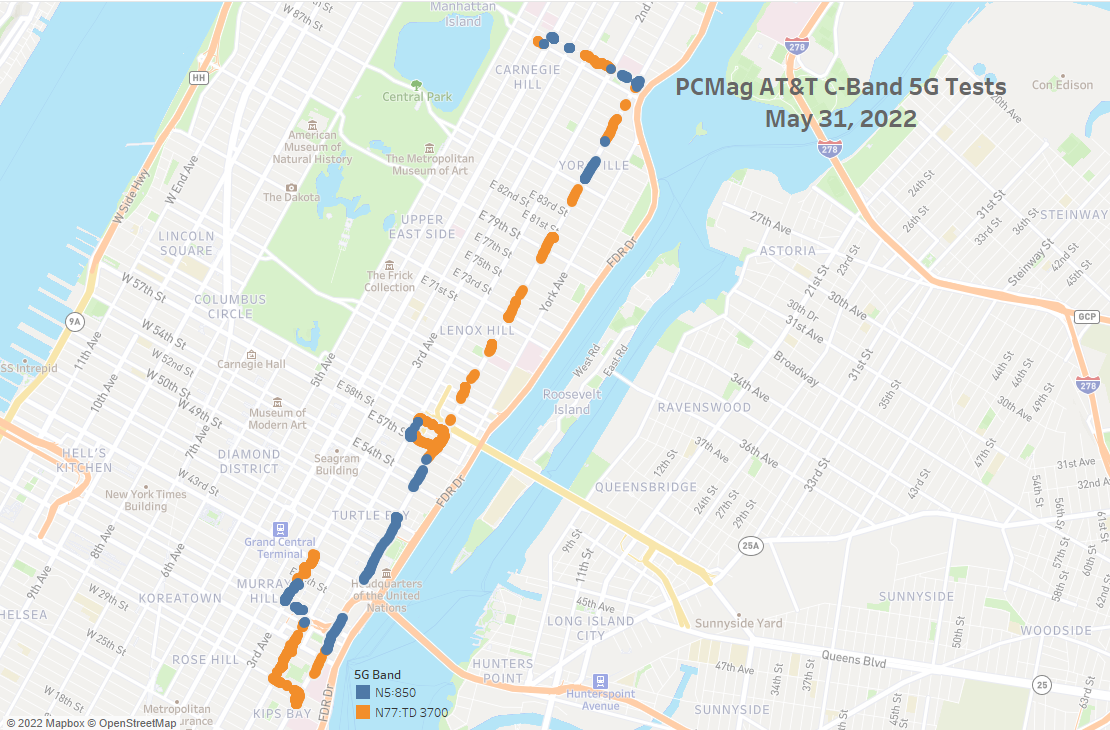 AT&T Is Secretly Launching Its Latest 5G Network in NYC: We Test It Out

AT&T is giving its new mid-band 5G network a stealthy rollout throughout New York City, and we have the first exclusive test results. They show that if you’ve been struggling along with an iPhone 11 or XR on AT&T, it’s finally time to switch to a new 5G phone.

Big Blue has had America’s strongest 4G network in our tests since 2019, but it was outpaced by both Verizon and T-Mobile where mid- or high-band 5G was available in 2020 and 2021. In recent months, Verizon has announced a massive expansion of its faster mid-band 5G network, while AT&T has only announced eight cities, and doesn’t show mid-band on maps.

On the word of some Twitter tipsters, though, I heard AT&T mid-band was taking Manhattan, so I headed out to check and found much more than I expected. AT&T is running mid-band 5G all the way up the dense east side of Manhattan; my phone showed band N77 (AT&T’s mid-band) for up to a mile at a time.

The orange on this map shows where our phone saw some AT&T C-band signal. It was much more than I expected.

This means big performance improvements. While AT&T has traditionally dominated in places like upstate New York, North Carolina, and Texas, New York City has always been a tough spot for the carrier. It was a real Verizon town for years, and in our 2021 results, T-Mobile showed the best performance.

To assess spectrum and performance, I used Wind Pro, a carrier-grade testing app from Ookla that we previously used to check out Verizon C-band in New York and AT&T C-band in Chicago. (Ookla, like PCMag, is owned by Ziff Davis.)

C-band just about doubles the performance we saw on AT&T. Along my route, AT&T’s low-band “5G” network averaged 93Mbps down and had its fastest test at 173Mbps, which is similar to our Fastest Mobile Networks 2021 results. But the new C-band “5G+” network averaged 167Mbps down and had a fastest test of 452Mbps. (The 511Mbps figure shown above is just part of a test, not a full test result.)

You’ll need a newer phone to take advantage of the new spectrum. We have a list of Verizon C-band-compatible phones; AT&T’s list is very similar. The iPhone 12 and 13 generations, not earlier iPhones, are compatible with C-band.

We couldn’t draw any real conclusions about mid-band range that could apply to other places, as Manhattan is unique. Because of the density and building canyons, cell ranges are extremely short, and so the maximum range of mid-band airwaves really never comes into play. According to CellMapper(Opens in a new window), the AT&T site we saw at 30th Street and 2nd Avenue has neighbors 0.2 miles south and 0.35 miles north (and CellMapper misses some sites).

That’s a really dense setup, but it’s still too far away from the dream of citywide millimeter-wave coverage that the carriers sold us in 2019. Millimeter-wave sites have a range of about 0.15 miles in a city like this, so there would be a noticeable gap between the 30th Street site and the next one north. So while we can’t tell you what AT&T’s mid-band reach is like in a less dense area, we’re comfortable saying that it’s needed to cover even central cities.

AT&T is moving fast. We didn’t see any of this during this year’s Mobile Networks testing, which was just three weeks ago. On our drive, we did see AT&T’s C-band in one mind-boggling rural place we didn’t expect, but you’ll have to wait for our full story later this month to learn that.

So why is AT&T keeping its major new moves secret? PCMag’s testing and analysis showed two possible reasons. Out of 47 tests, four of them dropped connections, and they were all on the new C-band system. That happens when the carrier is still tuning its network. We’re tasting the cake before it’s fully baked (but the batter is delicious.) 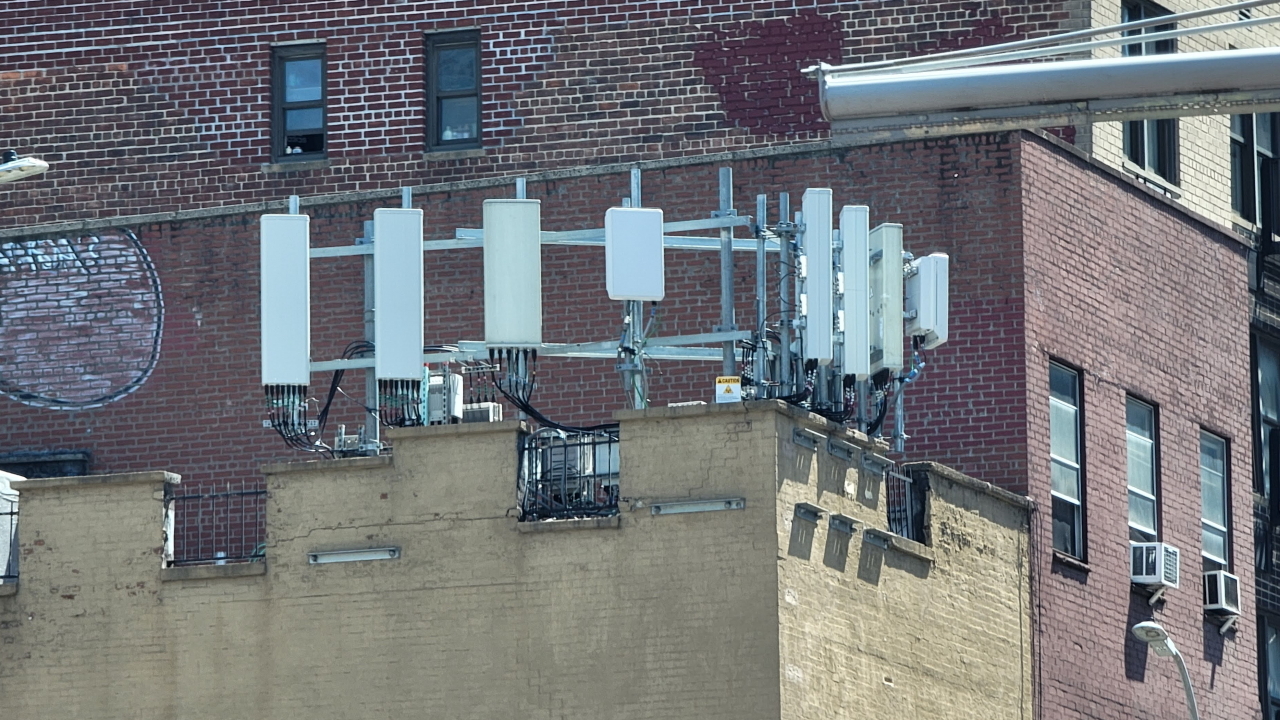 This cell site at 30th Street and 2nd Avenue is festooned with Nokia C-band panels for AT&T.
(Photo: Sascha Segan)

Not all cells are on C-band yet, as well, and AT&T may want more consistent coverage than it has now before launching. Our tests showed that a cell at 30th Street and 2nd Avenue definitely had C-band; one around 42nd and 3rd did, too; but the one in between, at 37th and 2nd? We didn’t see coverage as complete there. That said, AT&T deserves kudos for letting ordinary Joes on the faster network as it’s being built out.

Recommended by Our Editors

Should You Wait for iPhone 14?

There’s one more mystery here. AT&T has said publicly that it slowed down its C-band rollout to wait for equipment that also supports the newer 3.45GHz spectrum, but wireless watcher Nicholas Thomas says the equipment in New York is going up without those additional panels. It isn’t because AT&T can’t use the 3.45GHz spectrum here; while there are some parts of the country where the carrier will have to coordinate with the military(Opens in a new window) to use it, NYC isn’t one of them.

Tweet(Opens in a new window)

Adding the 3.45GHz spectrum will double AT&T’s mid-band 5G capacity in much of the country, including New York City. We found AT&T using 40MHz of its band 77 in NYC; it also has 40MHz of 3.45GHz to play with.

If you want to wait for that even-better performance, you’ll need a Samsung Galaxy S22 series or the upcoming iPhone 14. 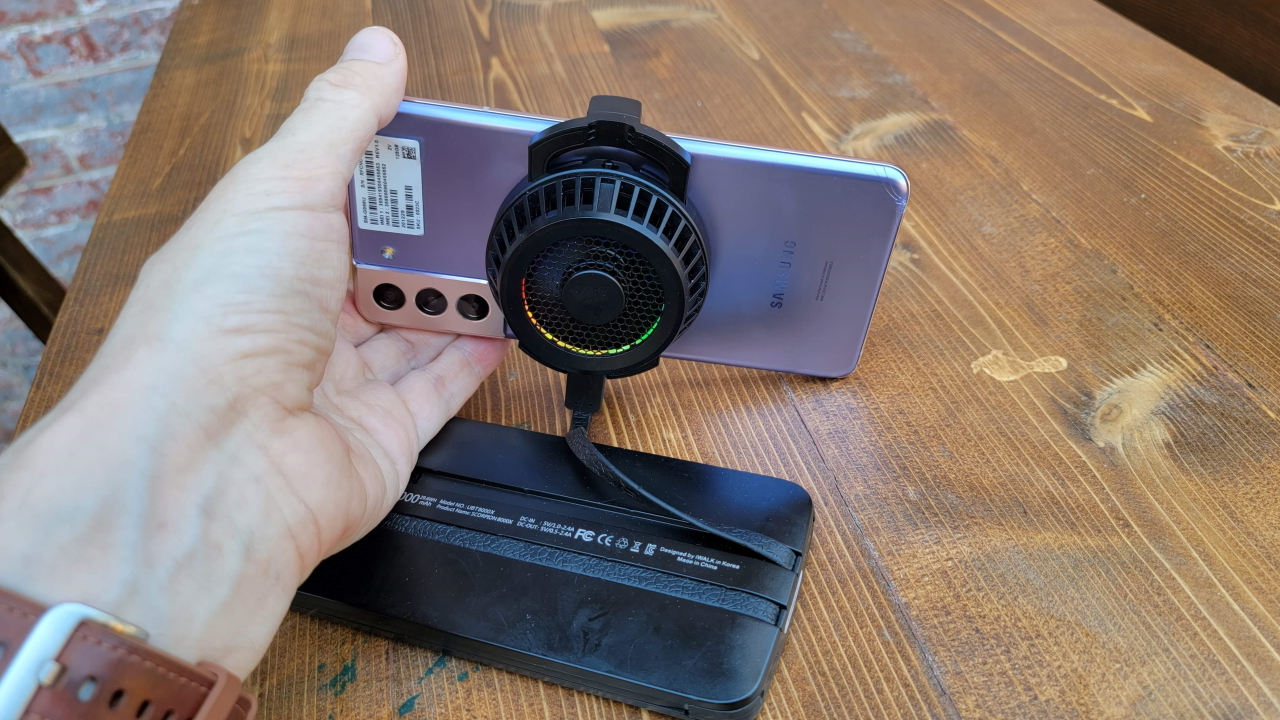 It could just be that AT&T’s congestion needs in NYC are so urgent that the carrier has to go with the equipment it can get right now. Or that it’s so easy to get up onto NYC buildings, AT&T has no problem adding that extra panel later. (Just kidding!)

In any case, we’re anticipating a big AT&T 5G announcement in early summer. On our 10,000-mile Mobile Networks drive, we found AT&T mid-band 5G in a half-dozen other cities and one startlingly rural area. For those details, stay tuned for our PCMag’s Best Mobile Network feature, coming later this month.

Sign up for Fully Mobilized newsletter to get our top mobile tech stories delivered right to your inbox.

This newsletter may contain advertising, deals, or affiliate links. Subscribing to a newsletter indicates your consent to our Terms of Use and Privacy Policy. You may unsubscribe from the newsletters at any time.