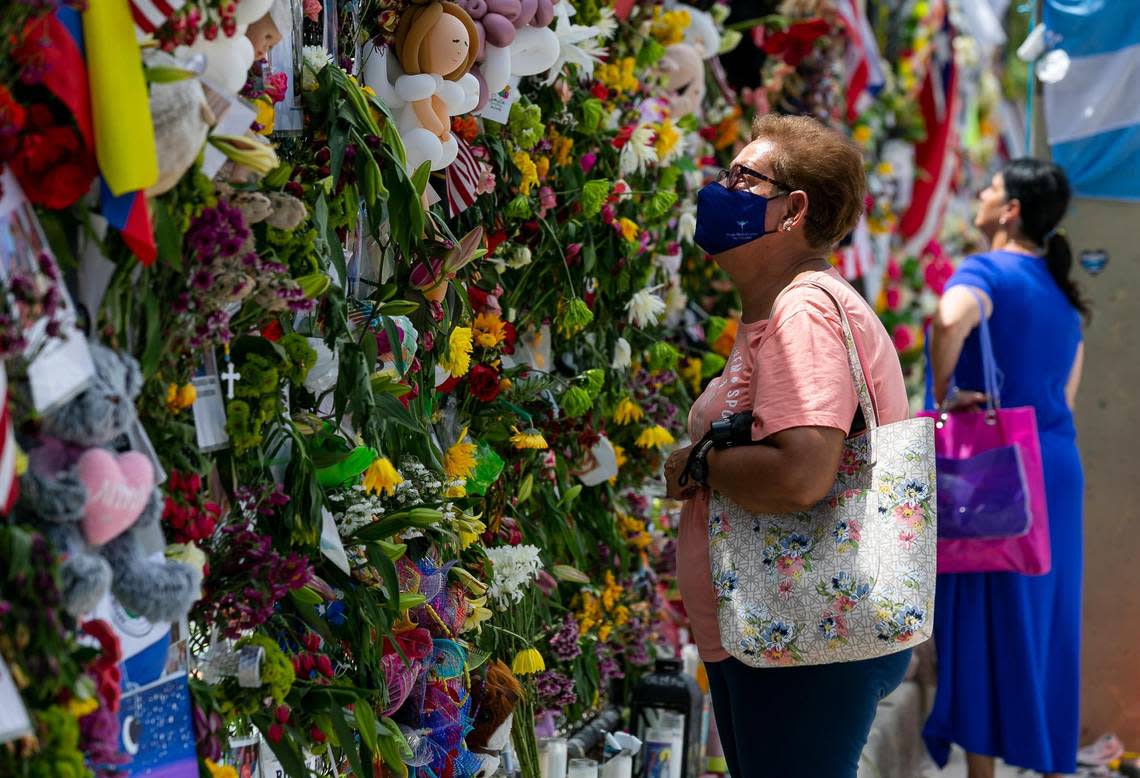 The three-week-long search for victims in the partial collapse of the Champlain Towers South in Surfside has become “increasingly difficult” as the recovery workers continue to search the rubble.

The once-buzzing site has grown quieter. The trailers from out-of-state agencies that once camped on Collins Avenue and the nearby parks and side streets have begun to leave. The media tent where several dozen reporters from around the country squeezed in with their camera crews is mostly empty, as twice-daily briefings that were reduced to once-daily briefings have been further reduced to a press release.

At the makeshift memorial on Harding Avenue, passersby have continued to stop and reflect, sometimes leaving a note or a bouquet of flowers. On Friday, some leftover prayer candles were still burning from a multi-faith community vigil Thursday night, which drew dozens to mourn those lost in the tragic collapse.

On the site, bulldozers and cranes continue to lift massive chunks of metal, concrete and other debris, organizing them into towering piles of the last remnants of the 12-story oceanside condo.

Collins Avenue between 83rd and 90th streets is still closed, but diverted traffic on nearby Harding Avenue has eased.

“Day by day,” Surfside Mayor Charles Burkett told a Miami Herald reporter as he visited the makeshift memorial. “We go day by day.”

The Miami-Dade Police Department identified two more victims Friday: Maria Popa, 79, who was pulled from the rubble July 9, and Brad Cohen, 51, who was recovered July 7.

Cohen, an orthopedic surgeon, was hosting his older brother in his 11th-floor condo. Gary Cohen, who was visiting from Alabama, was identified July 8. Brad Cohen’s wife, Soraya, was staying at a different apartment building in Miami Beach with their 12-year-old daughter on the night that the condo tower collapsed.

The death toll now stands at 94 bodies identified, and next of kin for each of those victims notified. There are 97 missing persons reports opened with the Miami-Dade County Police Department, and 241 people have been accounted for.

The system for reporting the numbers has changed slightly, with the death toll now only including those who have been identified. The method is meant to give the most accurate numbers and was put in place “out of respect for the families who are still waiting,” a Miami-Dade County press release said.

“At this point, it’s difficult,” Miami-Dade Police spokesman Carlos Rosario said Friday. “There are human remains that are being identified … it’s a scientific process, and we don’t want to say a wrong number. We took a step back.”

Burkett said there are still challenges in the quest to recover every victim, including water flooding the “bathtub” of a parking structure that continues to leak and crack. He said while the search mission — which is rounding out its third week — is progressing faster than anyone had imagined, discussing a timeline for the end of the search is still a touchy subject.

“It’s something everyone is uncomfortable about,” Burkett said.

As the search mission starts to wind down, outside engineers are wanting access to the site to investigate the cause of the collapse.

In response to the complaints of being blocked from the site, State Attorney Katherine Fernandez Rundle released a statement Thursday reminding them that law enforcement is in charge of the scene because it’s an active investigation.

The National Institute of Standards and Technology, the federal agency responsible for investigating, released an update on Friday into its ongoing probe.

NIST, which was given the authority to investigate major building collapses after 9/11, is using remote sensing technology to determine where pieces of evidence were located in the debris pile as the site begins to be cleared.

Investigators are using lidar, which sends out rapid pulses of light and records the reflections to create a type of map, from balconies on adjacent buildings. Drones and time-lapse cameras are also capturing real-time images of the site as the pile continues to change.

At least 200 pieces of debris, including columns, beams and pieces of concrete, have been tagged as evidence by NIST and are currently being held by the Miami-Dade Police Department.

NIST, which is not empowered to determine fault for the collapse, is not evaluating the safety of Champlain Towers North, which is being reviewed by local and state agencies.

NIST, which is also working with the Federal Emergency Management Agency, Florida State University, the Miami-Dade Fire Rescue Department, the National Science Foundation, the U.S. Army Corps of Engineers and the U.S. Geological Survey, is in the process of putting together a national team that will likely spend years investigating the collapse. Their investigation will aim to yield new information that will help prevent future building failures.