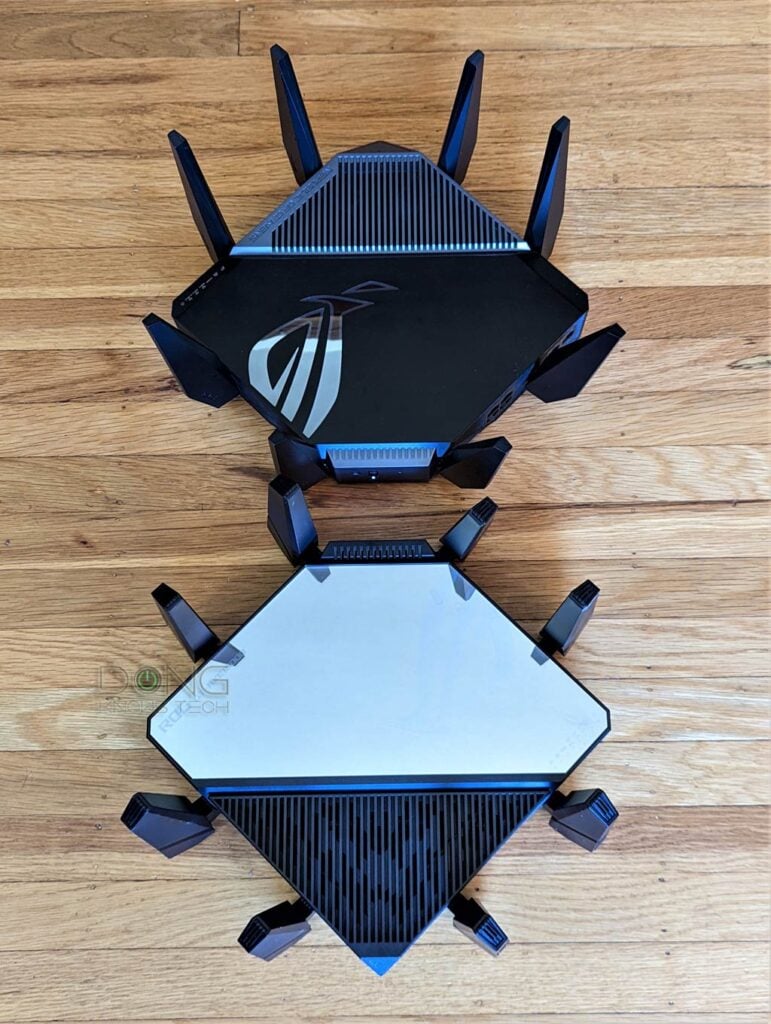 Since Oculus introduced Air Link in mid-2021, getting your VR headset connected wirelessly via Wi-Fi has been a new trend.

Among other things, this feature’s most significant implication is that it enables you to use the Oculus Quest 2 headset — or future ones — without being tethered to your computer via a USB cable. Instead, you’ll use the headset’s built-in Wi-Fi for the connection.

And that opens up a whole lot of possibilities. You can walk around freely in the real world while inside your virtual one. In return, picking the right Wi-Fi router for your VR headset is now an even more consequential task.

This post will help you figure this out and include a list of the best VR Wi-Fi routers on the market. The key here is bandwidth.

On gaming and best Wi-Fi routers

When it comes to VR and bandwidth, the quick take is the more, the better. VR is easily the most bandwidth-demanding application — there’s a lot of information going between the headset and your computer.

The bandwidth requirements depend on things that happen in real-time and how high the resolutions you want to appear in front of your eyes.

From my own experience and with the inputs of some vendors, here are my guesstimates on the bandwidth required for any 360-degree real-time immersive graphic rendering:

Again these are ballpark numbers, but the idea is you need a lot of bandwidth. However, don’t assume immediately that this is what you need from your Wi-Fi. That depends.

The Wi-Fi requirement for virtual reality

Indeed, despite the high bandwidth demand, VR apps’ need for Wi-Fi depends on how you use the headset.

Traditionally, when the headset (and therefore, you) links via cable to a computer, the USB connection handles this bandwidth.

And in this case, chances are you will use USB 3.0 or higher — so you’ll have around 5Gbps (5000Mbps) or more at your disposal — that’s plenty. But, you have to stay close to the computer and risk tripping on the wire.

(And with specific headsets, you have no other option.)

In this case, the VR app doesn’t need more Wi-Fi than any other app. So, in terms of home networking, you only need an excellent router or a good gaming one if you play VR games.

Best gaming routers: Any of these will give you an edge

So the gist is that using a wired headset makes VR similar to any regular application regarding networking needs. Your VR computer only uses Wi-Fi to connect to the Internet, so there’s no special bandwidth requirement other than a fast broadband connection and a good router.

Things change, though, with Oculus’s new Air Link feature. It opens up a new, more accessible way to be in the virtual world.

That’s because, in this case, the USB cord is no longer, and the headset uses Wi-Fi to link to VR the computer wirelessly.

And that dramatically puts more stress on the wireless connection since the VR-related bandwidth requirements remain the same.

As you can imagine, in this case, a couple of VR apps will virtually –pun intended — saturate a high-end router’s entire 5GHz band’s bandwidth. Just a reminder, this band currently caps at 2400Mbps (on paper) with Wi-Fi 6 in the best-case scenario. If you use Wi-Fi 5, that number is much lower.

In my experience, conservatively, you should only expect no more than around 800Mbps of sustained speed out of a 5GHz Wi-Fi band. And that’s enough for just one wireless VR application to perform at its best, with the highest resolutions.

Currently, no VR headset supports the 6GHz band (available in Wi-Fi 6E and future standards,) but that likely will change. The Oculus Quest 2 has a 60GHz Wi-Fi module, not Wi-Fi 6E (which uses the 6GHz band). This module will likely never be helpful unless you use a 6GHz adapter card for your computer, as mentioned below.

And that brings us to the best way to handle home networking for full wireless VR, applicable to the Quest 2 headset with Air Link or any other fully Wi-Fi headset.

Figuring out the best Wi-Fi solution for Oculus Quest 2 with Air Link, or any wireless VR set

Considering the bandwidth mentioned above, in this case, it would be best to dedicate as much Wi-Fi bandwidth to the headset as possible when you’re using it.

The best way to achieve this bandwidth objective: get a top-notch Tri-band Wi-Fi 6 or Quad-band Wi-Fi 6E router.

Getting the right router or mesh setup

When it comes to getting the right router for your VR needs, keep the following in mind:

Consequently, using a router with an additional 5GHz band — that’s a Tri-band W-Fi 6 or Quad-band Wi-Fi 6E router — and dedicate one of the two 5GHz bands — preferably the one with upper channels — to VR Wi-Fi with a separate SSID (network name).

If you live in a large home and need a mesh system, then:

Depending on how crowded your home is, a high-end dual-band router might still work out, but a fully wireless mesh system, like the Netgear Orbi or ARRIS mAX, definitely won’t cut it.

Let’s check out the current list of the best routers you can get for the Oculus Quest 2 with Air Link.

This list uses the review order, with the latest on top. The numbers in front of their names are just numerical and not meant to be the ranking. You’ll note that these are all traditional tri-band routers.

All Wi-Fi routers (or access points) will work for wireless VR. It’s just a matter of degrees.

The key here is to give the connection between your computer and the VR set the most Wi-Fi bandwidth.

If you can do that, any good router will work well. But, generally, it’s easier to get a traditional Tri-band router and dedicate one of its 5GHz bands to the VR set.

(In case you didn’t read the intro: This is the latest member on this list — the number is only numerical, not necessarily the ranking.)

I called the Asus GT-AXE16000 the “pinnacle of today’s home networking” for a good reason. This router has everything you’d need or want.

Most importantly, it’s the only Quad-band gaming router on the market that allows you to control both of its two top-tier (4×4 at 160MHz) 5GHz bands.

And all that makes the Asus GT-aXE16000 an excellent Wi-Fi machine for VR. That’s if you can afford it.

Expensive, NAS performance (when hosting a storage device) could be better

5. Synology RT6600ax: A highly customizable router with lots of potential

The RT6600ax has lots to offer and is one of the best Wi-Fi 6 routers you can find on the market. It doesn’t have a 6GHz band (Wi-Fi 6E) but is the first that supports the 5.9GHz portion of the 5GHz spectrum, making it somewhat future-proof.

The router performed well in testing and has plenty of VR bandwidth when you dedicate one of its 5GHz bands for the task.

Fast and reliable Wi-Fi with the support for 5.9GHz UNII-4 spectrum, mesh-ready

Can work as a full-featured NAS server

4. Asus RT-AX92U: The litter Wi-Fi 6 tri-band router that could, as a single broadcaster or part of a mesh system

The Asus RT-AX92U is like the mini version of the GT-AX1100 below. It’s a mini tri-band gaming router.

If you live in a relatively small home, it’ll make an excellent single broadcaster. But those in a large house can also use it as part of an AiMesh system. And when using wired backhaul, you can dedicate its 5GHz-2 band for VR.

Excellent set of features, including online protection, WTFast VPN for gamers, and system-wide Guest network when working as a mesh

Wi-Fi 6 available only on one of the 5GHz bands

The router has more polished firmware than its older cousin, and its lower price tag doesn’t hurt. (Alternatively, you can also consider the Archer AX90.)

USB-based storage performance could be better

The AmpliFi Alien is a bit weird. In a good way. The design makes it somewhat of a router for VR since it’s a bit out of this world. It’s not a gaming router, so it’s best for those using virtual desktop apps.

This one is also a tri-band router, and you have the option to get two to form an Alien mesh system. Just make sure you use wired backhaul.

Limited in conventional settings and features

No Multi-Gig port, not wall-mountable

The Asus GT-AX11000 is a top-tier tri-band gaming router. You can easily dedicate one of its two 5GHz bands to a VR Wi-Fi network, and the plenty of gaming features will help gamers, too.

The good thing about this router is that, like the RT-AX92U above, it’s also part of Asus’s AiMesh ecosystem. So, you can use it with other broadcasters to form a mesh. Just make sure you use wired backhaul.

Fast and reliable Wi-Fi performance with an excellent range

When it comes to virtual reality, the connection between your VR computer and the headset is the key, and moving from the USB cord to Wi-Fi puts much stress on the latter.

So, understanding the concept and dedicating the possible Wi-Fi bandwidth to the VR set will help deliver satisfying results.

Things will get easier down the road when VR sets are more optimized for a wireless connection and the support for the 6GHz Wi-Fi band becomes more commonplace.

Wanna be in touch? Sign up for DKT newsletter!