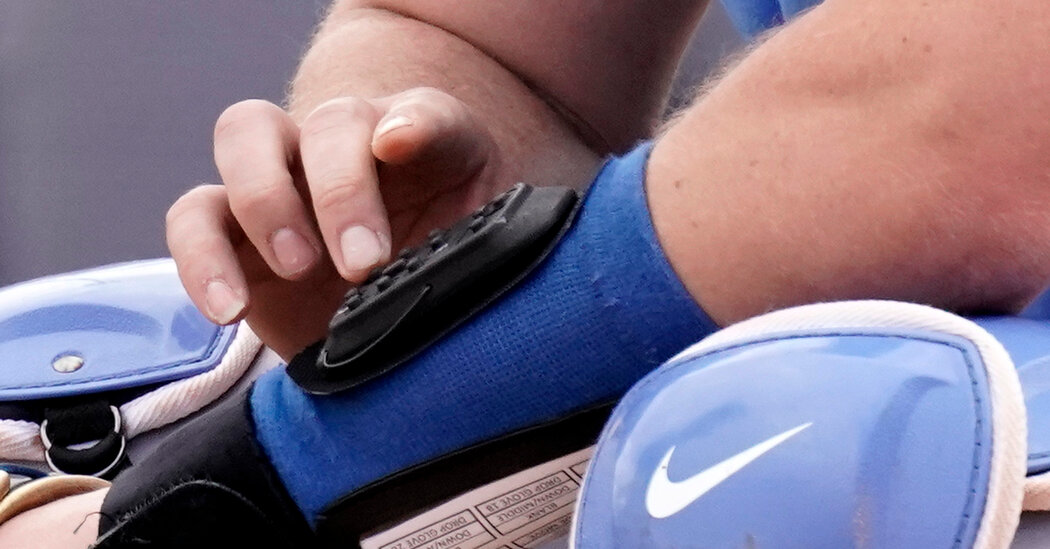 The system, which was officially unveiled on Tuesday, includes a push-button transmitter, worn on the catcher’s glove-side wrist, that sends the desired type of pitch to bone-conduction earpieces inside the caps of the pitcher and any three other players the team designates.

M.L.B. says about half of the 30 teams have indicated they will open the season with the system, and the league expects others to join once they become more familiar with it during the year.

Tested during spring training, the system is designed to eliminate the temptation for teams to employ illicit means to steal signs, as teams have done throughout baseball history. More urgency for a new system was felt after it was revealed that the 2017 Houston Astros had used illicit technology to steal signs and transmit them to batters on the way to winning a championship.

Virtually all sign stealing — including an accepted method of having base runners try to see the signs — begins by spying on the catcher’s fingers. But even aboveboard methods could be rendered obsolete.

M.L.B. said that the communication system, known as PitchCom, was encrypted, and that the league had other systems in place to prevent hacking or intercepting the signal.

Baseball is back after a labor dispute delayed the start of the season.

“We’ve done a lot of diligence there, and we feel good about that,” Chris Marinak, M.L.B.’s chief operations and strategy officer, said at a news conference on Tuesday.

During initial testing, Marinak said, M.L.B. found the system helped speed the pace of the game. With traditional finger signs, pitchers stand on the rubber and stare in at the catcher as the signs are relayed.

Under the new system, pitchers can get the signs while they are walking around the mound and collecting themselves, so that when they get on the rubber, they are ready to throw. It will not prevent pitchers from shaking off their catchers and the rare open disagreements between pitchers and catchers over pitch selection.

Most clubs indicated they would have the pitcher, shortstop, second baseman and center fielder wear the earpieces, Marinak said, and they could hear recorded, customized phrases like “fastball down and away.”

No team or pitcher is required to use PitchCom, and teams could have some pitchers who employ the system and others who do not.

Other technological initiatives for the coming season include microphones for umpires to speak to fans in the ballpark and those watching on television. The umpires, who received training ahead of the season, will explain rules and detail manager challenges of calls on the field, just as football referees do.

Teams will also have access to tablets in their dugouts that show video of recent at-bats, all controlled and delivered by M.L.B. The system is intended to centralize and limit the videos that teams have access to during games. Video clips of pitches will start about a half-second before the release of the pitch, eliminating “99.9 percent” of all signs shown by catchers, Marinak said. Teams will not be able to gain access to the videos until the end of each half-inning.

The league will also expand the use of robot umpires in the high minor leagues — but they will be limited to calling balls and strikes. Pitch clocks, which limit the time between pitches, will be used for all minor league games as a precursor for its potential use in the big leagues in the coming years.

« The answers to real estate’s climate tech questions may be all around us – TechCrunch
Wi-Fi 7 Explained: A Solid Upgrade vs 6/E »
Sidebar