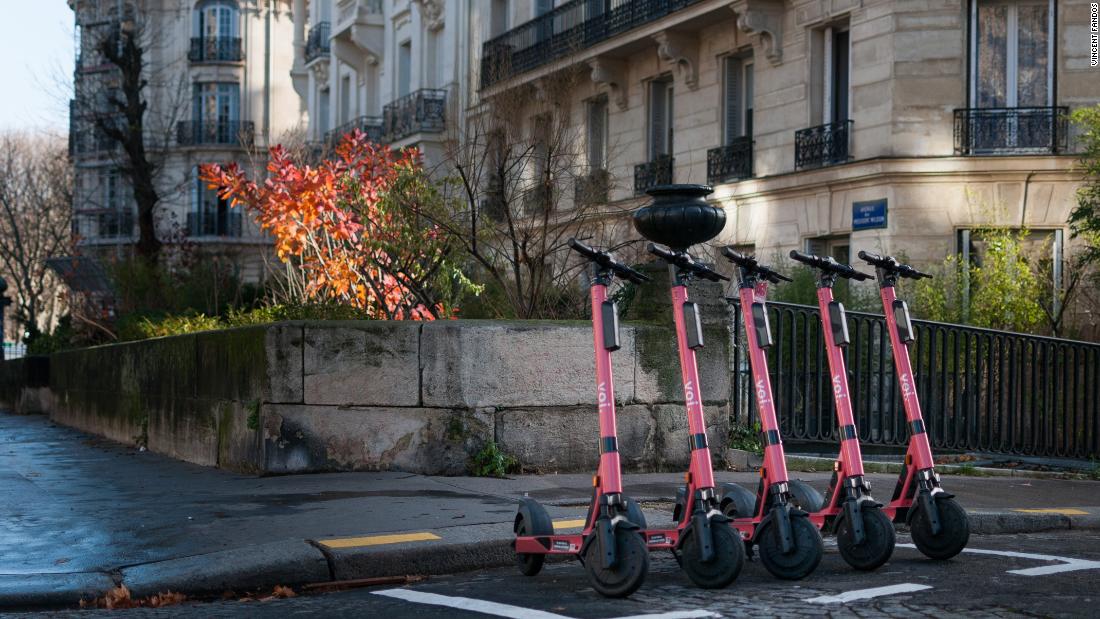 E-scooters embrace AI to cut down on pedestrian collisions

Swedish operator Voi — which has more than 6 million registered scooter riders across 50 European cities — has partnered with Dublin startup Luna to develop a system of cameras and sensors that can detect what surface a scooter is riding on, as well as the presence of nearby pedestrians.

The technology works in real time. A small camera mounted to the e-scooter’s vertical bar films the path ahead, while an algorithm — trained on thousands of images and videos — classifies the surrounding environment.

With this data, the scooter can be programmed to react in a number of ways.

“It could slow down its speed as the rider goes up on a sidewalk; it could reduce the speed if it detects pedestrians in the pathway … It could give audible warnings to both the rider and the surroundings if the technology detects behavior that we feel is unsafe,” says Shahin Ghazinouri, vice president of hardware engineering at Voi.

Exactly how Voi’s scooters will react is yet to be decided, he adds, and will depend on results from a year-long trial of the technology that began last November in Northampton, England.

Footage from a camera on a Voi e-scooter.

During the first phase of the trial, e-scooters fitted with Luna’s technology were ridden by Voi employees. The system was able to recognize road surfaces and pedestrians with more than 90% accuracy, Luna CEO Andrew Fleury tells CNN Business.

He expects the second phase to begin in March and April, when the scooters will be rolled out across Northampton for public use. Although the trial is centered on one town, Fleury says the technology could easily be adjusted to any city; the algorithms would just need to be fed new images showing how cycle lanes and sidewalks are marked in the area.

Similar technology has already been deployed in cars. It can tell a driver which lane they’re in on the highway or alert them to nearby obstacles when reversing. But introducing this tech to e-scooters has been a challenge.

“Micromobility is ideally a light and low-cost form of transport. We have to be conscious of the cost of the technology that we produce,” says Fleury.

Other e-scooter firms are deploying similar systems. Spin, Ford’s (F) micromobility unit, recently announced it would be adding computer vision and machine learning technology to its next fleet of e-scooters. Last year, Lime debuted a technology that uses speed and vibration patterns to identify sidewalk riding. If a trip is completed where more than half of the ride occurs on a sidewalk, users are cautioned via a push notification.
Cities are also being urged to introduce new safety measures as e-scooter use continues to skyrocket. Berg Insight, a market research firm, predicts that there will be 4.6 million shared e-scooters in operation worldwide by 2024, up from 774,000 at the end of 2019.
Alexandre Santacreu, author of the International Transport Forum’s 2020 report on micromobility, says that while the technology developed by e-scooter firms is promising, addressing city infrastructure and motor vehicle speed limits should be the priority.

Pedestrian collisions often “occur in places where scooter riders do not feel safe on the streets and they go onto the pavements,” he says.

To tackle this, cities must introduce more cycle lanes and work on slowing down cars, says Santacreu. The ITF also urges micromobility operators to provide city authorities with accident data.

The Luna/Voi partnership intends to do just that. “As a micromobility provider, we have large-scale (data) insights to provide to cities on how they can improve their infrastructure,” says Ghazinouri.

He hopes the deployment of computer vision technology will help to build cities that are safer, not just for scooters but for pedestrians and bike riders. “We want to make cities made for living and not for cars,” he says.