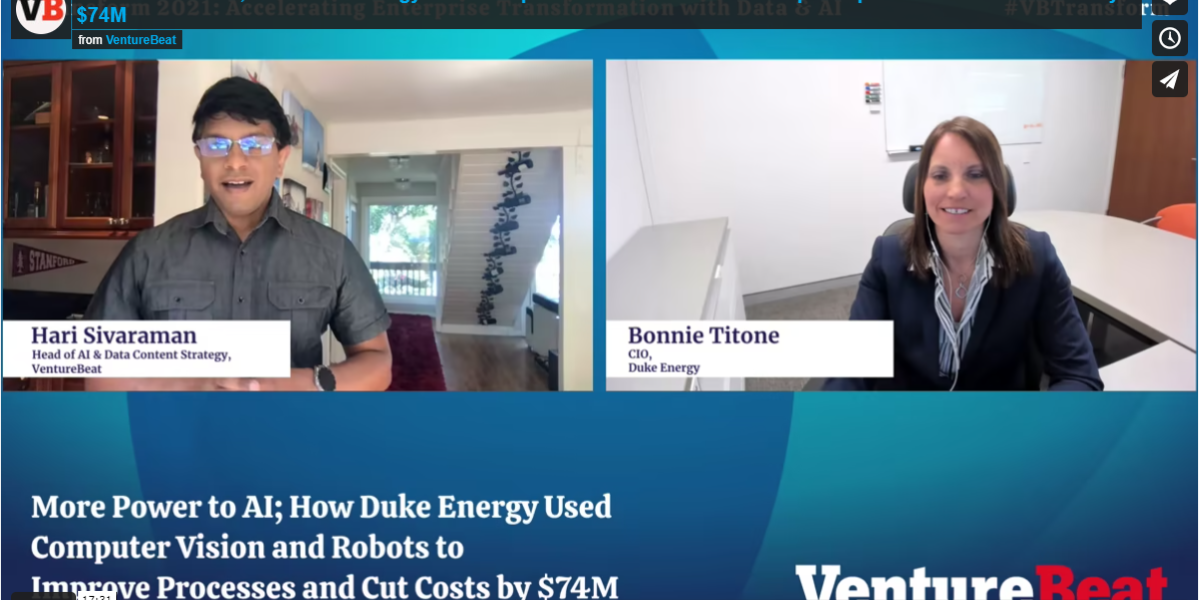 All the sessions from Transform 2021 are available on-demand now. Watch now.

Duke Energy was facing some significant challenges, such as the growing issue of climate change and the need to transition to clean energy in order to reach net zero emissions by 2050. Duke Energy is considered an essential service, as it supplies 25 million people with electricity daily, and everything the utility company does revolves around a culture of safety and reliability. The variables together was a catalyst for exploring AI technologies, Titone said, because whatever the company chose to do, it had to support the clean energy transition, deliver value to customers, and find a way for employees to work and improve safety.

“We look to emerging data science tools and AI solutions, which in turn brought us to computer vision, and ultimately, drones in order to inspect our solar farms,” Titone said.

There is a significant amount of solar farms in the shift to clean energy — Florida alone has 3 million solar panels, Titone said — and inspecting them is a very labor-intensive, time-consuming, and risky endeavor. It can take about 40 hours to inspect one unit, and a regular solar site may have somewhere between 20 and 25 units to inspect. It’s a dangerous task, as technicians walk around 500-acre solar sites with heat guns so they can inspect the panels and may need to touch live wires. The company began experimenting with advanced drones with infrared cameras to try to streamline the work. The technicians were able to use the images taken by the drones to determine where they’re seeing faults and issues. Thousands of images were stitched together with computer vision, giving technicians the ability to look for issues using the images in a much safer way, Titone said.

After finding the computer vision, Duke Energy began to consider automating the process. The company developed a MOVES model (Mobile Observation Vehicle and Equipment Solutions) that collects and processes the data and images from the drones and identifies the faults within minutes. Through applying AI and machine learning technologies, the program has significantly reduced labor and time costs for the company. Accuracy also continued to improve over the time; the latest model used in the inspection reached 91% accuracy.

“We compiled that information for the technicians and gave them the ability to navigate pretty easily to where we can schedule maintenance for customers, and we did this all without a technician ever having to go out to the site,” Titone said. The program has led to more than $74 million reductions in cost and 385,000 in man-hours.

Duke Energy had to consider the question of how to process the data the drones were collecting. A typical drone flight can produce thousands of photos, sometimes with no precise location data associated with the images. Trying to do the analysis in the cloud to figure out if the drone image showed a solar site would be impossible because of the sheer amount of data and information involved. Duke Energy had to process the images at the edge so that it could make real-time decisions. The images had to be stitched together to make a precise picture of the solar farm without having to require somebody go and actually walk around the site.

Instead of trying to do everything at once, Duke Energy worked on small increments of the project. Once one thing worked, the team moved on to the next step. Since Duke Energy had its own software engineering team, it was able to build its own models with its own methodologies as part of a one-stop shop. This process eventually led to creating over 40 products.

Titone said, “Had we not had that footprint in the cloud journey, we wouldn’t have been able to develop these models and be able to process that data as quickly as we could.”

Titone also discussed best practices with storing and cleaning data. As the team has moved toward a cloud-based data strategy, it uses a lot of data lakes. The data lakes are accessible by other systems and also by some data analysis and data science components that must quickly process the information.

“I would say we’re using a lot of the traditional methods around data lakes in order to process all of that,” Titone said, and the team models the data with “what we call our MATLAB, which stands for machine learning, AI and deep learning.”

Reflecting upon the high accuracy that the product reached, Titone said that it was important to be OK with failing in the beginning. “I think at the beginning of the journey, we didn’t have an expectation that we would get right out of the gate,” she said. As time moved on, the team learned and continued to modify the model according to the results. For example, in the journey with iterations and reflections, the team realized that they should not only extract images but piece different processing techniques together. They also adjusted the angle and height of the drone.

AI as a career opportunity

The fact that AI is more efficient and cost-effective does result in reduced labor hours, which raises the concern that AI is taking jobs away from people. Titone said the better perspective was to view this as an opportunity. She said that upskilling employees to be able to work with AI was an investment in the workforce. If the employees understand AI, she said, they become more valuable as workers because they qualify for more advanced roles.

“I never approach AI as taking somebody’s job or role; the way I’ve always approached AI is that it should complement our workforce, that it should give us a set of skills and career paths that our teammates can take,” Titone said.

VentureBeat’s mission is to be a digital town square for technical decision-makers to gain knowledge about transformative technology and transact.

Our site delivers essential information on data technologies and strategies to guide you as you lead your organizations. We invite you to become a member of our community, to access: