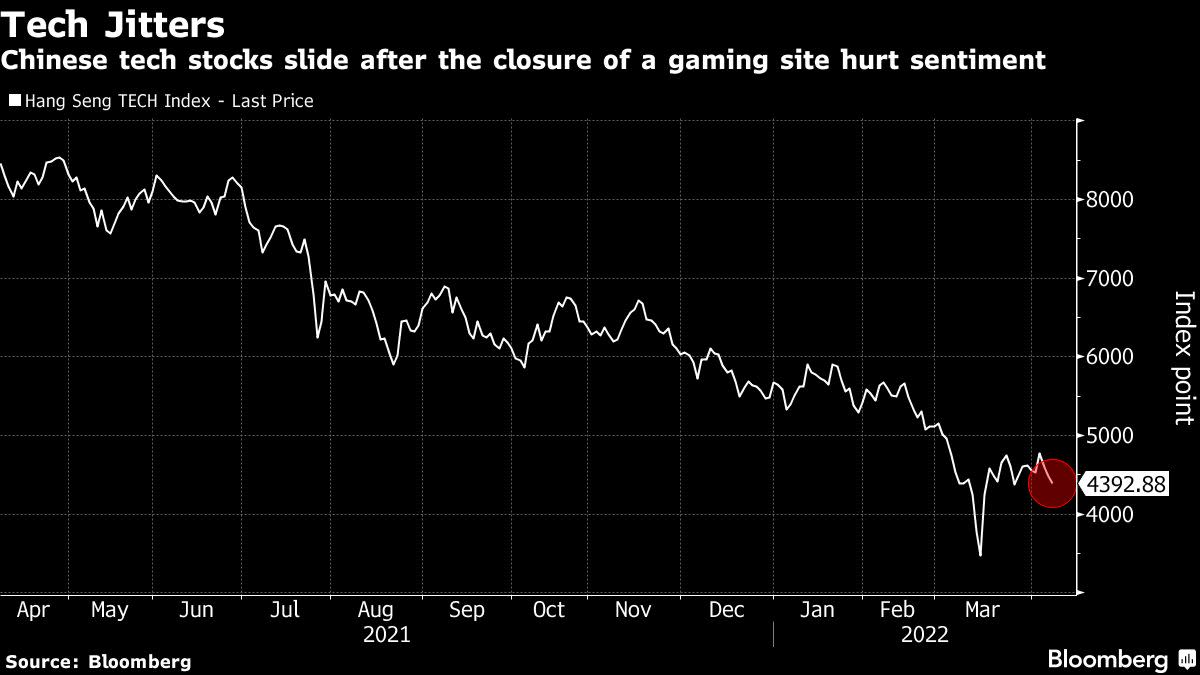 Most Read from Bloomberg

The Hang Seng Tech Index closed down 1.2% on Friday, having earlier shed as much as 3%. Video streaming firm Bilibili Inc. and Tencent supplier GDS Holdings Ltd. were among the worst performers. Meituan also weighed on the gauge, following news that Sequoia Capital reduced stakes.

Tencent’s decision comes more than a year after Beijing blocked a merger between its investees, an entity which the soon-to-be closed platform Penguin Esports would have been folded into. China tech stocks have come off a record low in mid-March, but yet to stage a sustainable rally amid regulatory risks.

“Shutting down Penguin Esports or any other service will weigh on cloud, data services demand by Tencent, affecting suppliers like GDS,” said Ivan Chow, president of Imperial Financial Group.

Investors remain wary about the fragile tech sector following the yearlong rout, with shares hit recently after Beijing’s crackdown on the live-streaming sector’s tax evasion. Even as Chinese authorities have repeatedly vowed to add policy stimulus and stabilize markets, it’s done little to ease concerns about the spillover from higher U.S. interest rates, among other risks.

On Friday, China’s regulator said it will start a campaign until early December to curb violations in internet companies’ algorithm, warning that websites and platforms with big influence will be targeted.

The announcement appeared to ensure that tech companies are transparent with consumers on the data they are collecting to protect privacy, said Wai Ho Leong, strategist at Modular Asset Management.

But with some apps already giving users an option to turn-off personalized push services, “the spirit of these regulations and the inevitable inspections and audits may have been expected since earlier this year,” he said.

Most Read from Bloomberg Businessweek