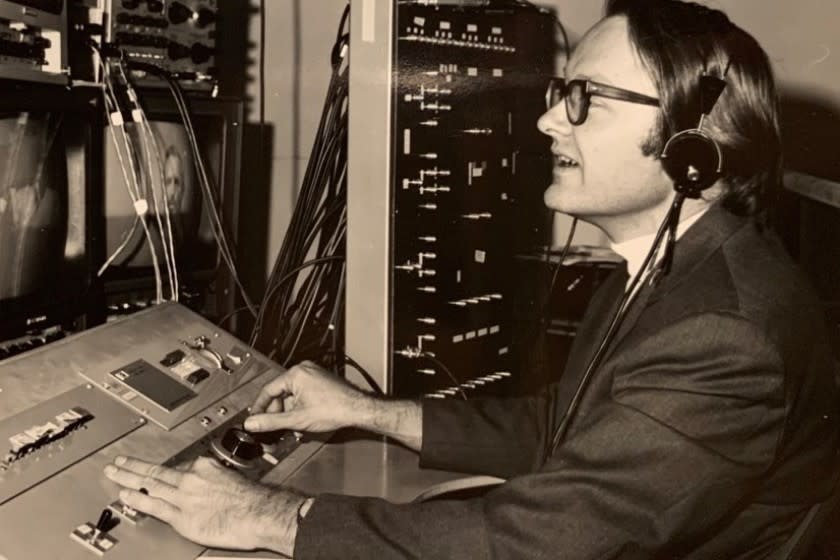 Bill English, wizard behind the scenes of seminal computer technologies, dies at 91

On Dec. 9, 1968, the then-small world of computer engineering was shaken to its core by a presentation of new technologies projected onto a screen in a San Francisco hall.

The attendees at the historic event saw demonstrations of video conferencing, the first public use of a computer mouse, hyperlinking in which clicking a word in a document transported the user to an entirely new document — and more.

The man who was the star of the hands-on show seen in the hall was Douglas Engelbart, whose team at the research center SRI in Menlo Park, Calif., had been developing them for years.

You need someone to make it all happen. That was Bill English.

But the man who had designed what is known now as “The Mother of All Demos” and was working behind the scenes to make sure they all worked was William K. English, who died Sunday at the age of 91.

Bill English played an indispensable role in more than Engelbart’s demo. A few years after that event he was recruited to join Xerox Corp.’s newly established Palo Alto Research Center, the legendary Xerox PARC, where he helped midwife PARC’s invention of the personal computer and other innovations.

A brilliant hands-on engineer with a deft touch at managing people, “his whole goal was to make things work,” says his wife, Roberta.

English stayed at Xerox long enough to work on the Star, the company’s ill-fated attempt to commercialize PARC’s technologies, co-designing a display monitor for the Star’s Japanese version, introduced in 1981. He subsequently left Xerox to join Sun Microsystems and later the pioneering electronic game console maker 3DO.

Along the way he served as a Navy officer in Japan and at California’s Port Hueneme and as a subject in a research project into the psychological effects of LSD and psilocybin. But it is on computer technology where, though unknown to the general public, he left his greatest mark.

In the early 1960s he joined SRI to work on magnetic logic technology, then in 1964 became the first member to join Engelbart’s SRI lab. Engelbart was a charismatic visionary whose Augmentation Research Center was devoted to his conviction that computer technology could not only assist the human thought process, but enhance it — that the computer’s ability to store, classify and retrieve information would someday change the way people thought, wrote and calculated.

With English as his chief engineer, Engelbart developed interactive software and hardware allowing users to manage and manipulate text and video images to communicate with one another. In 1965 the lab receive a NASA grant to invent a technology for moving a cursor and selecting an item on a display screen; Engelbart developed the concept, but it was English who designed the first prototype — the mouse.

Around the same time, English and Engelbart were invited to participate in a research project at the privately funded International Foundation for Advanced Study, which was located nearby in Menlo Park.

The institute’s goal was to test the effect of psychedelic drugs on the work of creative individuals drawn from all walks of life, including engineering. At least 40 subjects were recruited and asked to fill out questionnaires about whether they thought the drugs had helped or harmed their mental processes, given them better understanding of beauty and art, produced a religious experience and so on.

English never talked much about his experience in the project, according to Robert and to English’s younger son, John, though Engelbart long remained an advocate of the project. In any event, it was abruptly shut down when California outlawed LSD in 1966. The federal government outlawed the drug two years later.

Engelbart’s work was known to only a small circle of acolytes until 1968, when he was invited to give a talk describing his work at the Fall Joint Computer Conference of two leading engineering societies in December 1968. English, who had volunteered as a lighting and sound technical advisor for a San Francisco stage troupe known as the Actor’s Workshop, advised Engelbart that a mere speech would fall flat; he had to give a performance.

Thus was the Mother of All Demos born. English essentially choreographed Engelbart’s presentation. Just as important, he made sure there were no technical glitches. That was a challenge, since Engelbart would be in San Francisco demonstrating a system that was being operated 30 miles away in Menlo Park, the two sites connected via a microwave relay. The event went off virtually without a hitch, and a new world was born.

“Doug wasn’t doing it,” recalls Roberta, who had worked as Engelbart’s secretary. “It was all Bill.” Engelbart died in 2013

Despite the success of the demo, frustration with Engelbart was rising among his lab members. The problem was that Engelbart was engaged in a never-ending search for knowledge and utterly uninterested in commercializing the lab’s innovations.

In 1970, PARC came calling in the persona of Robert W. Taylor, who was assembling a team of young engineers and scientists to map out a new digital world. As an officer of the Pentagon’s Advanced Research Projects Agency, Taylor had funded some of Engelbart’s work, and he set about raiding his lab for PARC.

The first member to jump was Bill English, who was enticed by the prospect of heading his own lab and driving toward commercialization. As it happened, much of PARC’s work would depart from the concepts English imported from SRI. His system was complicated to use and required intensive training; PARC was trending toward software and hardware that were simple and intuitive to use.

Nevertheless, English became something of a mentor for young members of the PARC labs, especially the brash young Alan Kay, whose personality combined an Engelbart-like vision of human augmentation with a nearly pure innocence of corporate culture.

Kay had spent his career in an academic environment in which he was accustomed to obtaining research grants almost for the asking.

He was confounded by the funding limitations at PARC; for all that the research center was supposed to be a place where brilliant young thinkers could follow their instincts to create new things, the purse strings were still held by bureaucrats who thought Kay’s ideas for a personal computer simple enough to be wielded even by creative children were too hazy and romanticized.

English took it upon himself to school Kay in the concepts of research budgets and step-by-step planning. “I’m afraid I really did ask Bill, ‘What’s a budget?'” Kay recalled later. English prompted Kay to draft a detailed plan for a device that would produce text and graphics on a display screen, which sprung a budget of $230,000 from PARC’s tight-fisted bursars. In time and with the help of some of PARC’s master electrical engineers, the concept morphed into PARC’s Alto, the world’s first personal computer.

At a 40th anniversary celebration of the 1968 demo, Kay paid homage not only to Engelbart but his chief engineer.